Not too many posts on the tech blog this year,  surprised though that the post  Google Glass is Dead, or is it… didn’t make the top ten!

Looking at fonts especially those designed for comic strips was the tenth most popular posting in 2015. Written in 2010 it was about the excellent Comic Book Fonts available. Read the post Comic Book Fonts.

Thinking about the Apple TV back in 2012 was the ninth most popular post on the blog. Apple TV Thoughts was quite a long post on my reflection on the Apple device.

The eighth post is from 2008 when Apple added free episodes to the iTunes Store. The high ranking for this post is probably down the blog post title: Free iTunes TV Shows (on UK iTunes Store).

A few years ago my HP printer died when I replaced the inks. The seventh most read post is about my dead printer. My printer is dead!.

I haven’t done a podcast choice for a while now, but the sixth most popular post on the blog was the second in the series, Podcast Choice #02 – Friday Night Comedy from BBC Radio 4. Quite a popular post as people seem to keep wanting to have my copies of the shows I have downloaded over the years through iTunes.

Comic Life is one of my favourite apps on the Mac, but once I lost my styles and that is at number five. Where are my Comic Life Styles?

Wifi makes an appearance at number four, with my experiences at a Haven Holiday Camp. Haven no wifi.

More Wifi this time with my experiences with BT Wifi networks resulted in the third most read post, called I don’t like BT FON.

In November 2014, we finally got free wifi on First Great Western trains, and my post about this, Finally, free FGW wifi on the train was the second most popular blog post in 2015.

I use to post a lot of posts on QR Codes and the most popular post the year was this one from January 2015 about the ones you found on Cadbury chocolate bars. Cadbury QR Coding and Twirling.

My recent experience with 99p rentals from iTunes has not been entirely successful. As you may know every week iTunes puts up, a usually decent, film for rental for 99p.

My first problem was with renting the re-made Ladykillers starring Tom Hanks.

Anyone who has rented a movie from iTunes knows that you can transfer the rental from the computer to your iPad (or iPhone). So knowing that I was going away I transferred the rental from my iMac to my iPad. However I never did find the time to watch it…

After a couple of days I decided to watch it at home. One of the things I like about the new Apple TV is that it is possible to watch rentals that are on your Mac without needing to transfer them. This means you can rent non-HD films on your Mac and then view them on your TV using the Apple TV. If you rent from the Apple TV, you “have” to rent HD movies and they are £1 more than the SD ones on your computer. Did I say I was a cheapskate? So having decided to stream the film via the Apple TV, I couldn’t find it… ah yes I thought it will still be on my iPad. Ah but it wasn’t… no I couldn’t find it anywhere!

After reflecting a while I realised I had in the intervening period restored my iPad after having a few problems with it and as a result I had “lost” the rental. Of course there is no way to retrieve a rental (you can’t even retrieve a video purchase let a,one a rental).

So in the end what we did was re-rent it, luckily it was still 99p.

As for the film itself, well it was amusing and Tom Hanks was very good. However the original Ealing version

with Alec Guinness is SO much better and if you had to choose, go for the Ealing one.

I had another problem with rentals the other day, this time it was more my fault. I had rented another 99p rental, Donnie Darko, a film that I have been meaning to watch for a while. I started to watch the film and before even the studio ident had finished I got called away. So I never got to watch the film that evening. I was out the following night, so alas with only a 48 hour window in which to watch it, I missed the window and iTunes removed it from my computer. A 48 hour window is usually enough for me, but this time I didn’t have the time, and it’s probably why I don’t rent many films from iTunes. It’s the same reason I stopped renting from Blockbusters too, however I still do rent from the Library, where I got the Adjustment Bureau today. Not only was it cheaper than iTunes at £3, whereas iTunes is £3.49, I can also have it for a week!

Apple’s iTunes Store is offering twelve days of giveaways from the 26th December to the 6th January.

From 26 December to 6 January you and your friends can download a free song or music video, app, TV episode or film from some of the biggest star performers on iTunes. Each free download will be valid for 24 hours only.

Usually most of the stuff is something yoou wouldn’t want to to download, today for example it’s Cheryl Cole… however within the twelve days there are usually one or two gems amongst the glass baubles.

According to PC World (Magazine) Apple recently decided to “ban” a magazine app from the iTunes Store, because it was focused on the Android operating system.

As one might guess, Android Magasinet–a brand-new, bimonthly magazine app from Danish publisher Mediaprovider–focuses on Android and the devices that run it. When Mediaprovider managing director Brian Dixen asked an executive from Apple Worldwide Developer Relations why the app was banned, he was told explicitly that it was the magazine’s Android-focused content, according to a report on Mediawatch.

“You know… your magazine…it’s just about Android…. we can’t have that in our App Store,” the Apple executive reportedly told Dixen.

Is this really “offensive” content or is this about competition?

Fair enough Apple can decide themselves what does and what does not go into the App store and I guess there would be other (less lucrative) channels that Mediaprovider could use for the Android based magazine so that iPad owners could read it.

Bizarre behaviour from Apple, but then we have come to expect that.

So the big iTunes announcement was that the Beatles were coming (finally) to the iTunes store.

So this afternoon Apple have an iTunes announcement.

Rumours indicate that this is probably going to be an announcement that the Beatles will now be available in the iTunes Store.

Another rumour indicates that Apple will announce live streaming for iTunes.

I wonder if the wording of the “invitation” is significant? It does say iTunes and not iTunes Store. Does that make a difference?

There are quite a few Apps that are not available in the UK iTunes Store that I know I would find useful, so I got myself a free US iTunes Store account.

Select United States as your location from the country selection drop down menu available at the bottom of the page by clicking the Union Jack icon and then clicking the American flag.

After choosing the country, search for BBC News (though that is now available in the UK).

When the application’s page is loaded – click the Free App button, and the login window will appear.

Fill out US address details and click on continue. If you don’t know any valid US address you can use Apple US retail store address by pointing your browser to http://www.apple.com/retail/ and choosing a store from the list available in the page.

Beverly Hills 90210 is another useful address!

After submitting valid US postal address details, iTunes Store registration takes you to payment mode page.  Here choose the option None and finish the registration.

You will now see the congratulation page.You’re done! Your iTunes Store account is created without credit card and from now onwards you can download all the free applications available to US users.

Engadget reports that Apple may be ready to launch a new Mac mini with HDMI.

A Mac mini with HDMI. Makes sense, right? Well, it hasn’t to Apple so far, but it looks like it just might be ready to change its tune. That’s according to AppleInsider, at least, which has it from “two people familiar with the matter” that prototypes of a Mac mini with an HDMI port have been seen making the rounds in the usual inner circles.

Back in March 2008 (two years ago) there were rumours that Apple were going to kill the Mac mini. Back then I said:

I do like the Mac mini, it works well as a little Mac for testing and trying things out as well as introducing people to the Mac. I also have used it in the past as a server for various web services and for limited use it works really well – probably would not be too happy if it was a production server.

I did try it as a TV computer, in other words connected to my TV, but I never really used it, in the main as it was an old G4 PPC model and was rather slow for recording and capturing video from an EyeTV USB device. The newer Intel models have the advantage of remote control and faster processors and graphics better suited to video.

I am looking to get a new TV when the Freeview HD models become more widely available. At the time I did consider getting an Apple TV over putting a Mac mini under the TV; as the Apple TV did have HDMI and as well as buying HD TV shows from the UK iTunes Store, you could rent HD movies for use ONLY on the Apple TV. If there is a new Mac mini with HDMI and you can rent HD movies on the new Mac mini then I may get one over an Apple TV.

Apple’s iTunes Store is offering twelve days of giveaways from the 26th December to the 6th January. 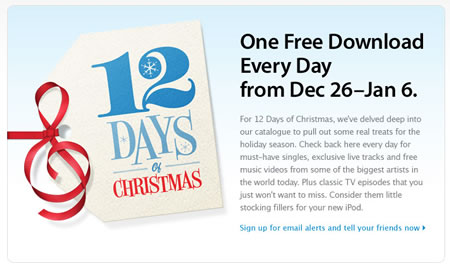 From December 26th to January 6th you and your friends can download a free song or music video, app, TV episode or film from some of the biggest star performers on iTunes. Each free download will be valid for 24 hours only.

So there I was looking to buy some Halloween music from the iTunes Store for a Halloween party (by the way it was rubbish music, but a great party).

But it’s not Christmas…