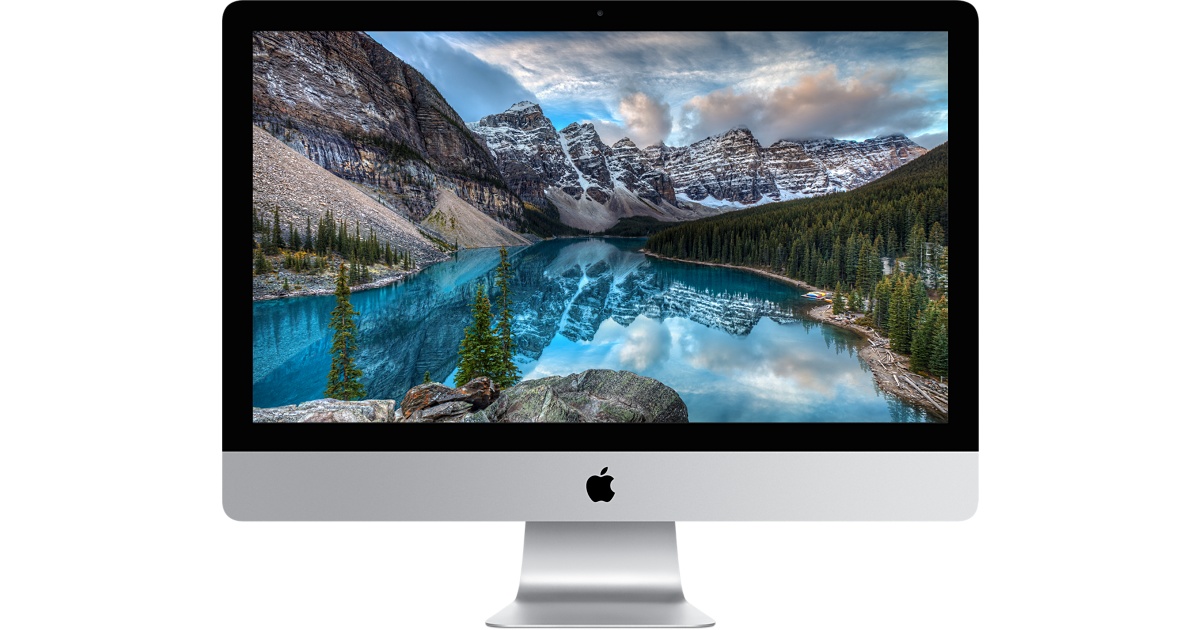 Back in April I had a few problems with the Fusion Drive on my 2014 iMac. So much so that I had to copy the data off the iMac onto an external drive and then reformat the drive and reinstall OS X.

On Saturday it did just that. I was using the iMac to sort out some train tickets and other tickets when it just froze. Nothing was working, so I switched it off at the back and when I switched it back on I was rather downhearted, but not really surprised, to see the prohibitory symbol.

I booted into Recovery mode (hold down the Command and R keys when turning on and release once you see the Apple logo or a spinning globe). I ran disk utility which confirmed the Fusion Drive had failed. The SDD was working fine, but the (mechanical) hard drive had failed. A Fusion Drive us made up of an SDD drive and a standard hard disk drive combined to look like a single drive under OS X.

Luckily I hadn’t lost any data, but wasn’t sure what to do next.

I did reformat the SDD and installed OS X onto that (and even upgraded to Big Sur). The speed was very impressive and to be honest part of me did think about leaving it like this. However this wasn’t a practical long term solution as the iMac would just randomly reboot for no reason. Certainly couldn’t use the iMac for anything productive.

I did look into fixing the iMac myself, but in the end booked it into the Cribbs Causeway Apple Store Genius Bar for an appointment. The 2014 iMac counts as vintage technology (as it is just under their seven year limit) and isn’t quite obsolete, yet!

Yesterday I tried to reinstall Mac OS X on my iMac which had failed to start. As I was ill I actually didn’t get back to the computer until this morning.

Alas the install process was still on the progress bar, which I knew wasn’t quite right.

Well I tried again to reinstall Mac OS X on the iMac which failed again.

I then put the iMac into disk mode and using another Mac viewed the drive, and I could see the files and documents.

I actually wasn’t too concerned about loss of data, as most of my working files are in the cloud in Dropbox and OneDrive, whilst all my images are currently backed up to Amazon Drive, as well as physical storage.

I suspected there might be a few files that I only had a single copy of, so decided not to reformat the drive and install a fresh copy of OS X.

Still feeling ill, I turned it off and went back to bed to watch Netflix.

Well it had to happen didn’t it with my luck with the hard drive on my iMac.

The computer had slept the night before and I had woken up not very well so didn’t go to the computer in the morning. Though I was off work sick, I did need to start a Zoom meeting for an external consultant, but when I went to the computer pressing the space bar didn’t wake the computer.

In the meantime I started Zoom on the iPad so I could do that before focusing on the iMac.

I was slightly annoyed that the iMac was now stuck on the Apple logo and progress bar.

Quick Google search, said to start in safe mode and identify the issue.

So turned the iMac off and attempted to restart it in Safe Mode.

So then tried Recovery Mode to repair the disk using Disk Utility. This did launch successfully, which was slightly reassuring that maybe it wasn’t a physical problem with the disk, but a software issue with the disk.

I ran Disk Utility, that indicated a few errors, so decided to reinstall Mac OS on the drive. I started this and left it to it.

Over the last twelve months I have published 19 posts.

The post at number ten was from ten years ago, and contained a (now deleted) YouTube video on the new Skyfire browser for your Windows smartphone or PDA. Skyfire discontinued its Skyfire Web Browser in 2014.

The post at nine was now a rather dated post from ten years ago about how Scrabble’s owners were going to sue Scrabulous.

The eight most popular post was another ten year old post which was about when Apple was offering some free TV shows on iTunes.

The post at number five was wondering Where are my Comic Life Styles? I found them.

The fourth most popular post was about the free wifi (or lack of) on my holiday, Haven no wifi.

The post at three was about Dusting off the Pogo my old Polaroid Bluetooth pocket printer. Still going strong.

The second post was about when my iMac Fusion Drive Failed and had to have it replaced.

So the most popular post on the blog was my post about QR codes on chocolate bars, Cadbury QR Coding and Twirling was published in 2015 and was one of many posts I published on the use of QR codes back then.

Over the last twelve months I have published 26 posts, many of these were about my return to fibre. So it is nice to see that the tenth most popular post on the blog this year was from nearly a year ago.  We will have fibre in “12 months”!  I said back then that according to BT Openreach we would have fibre within twelve months, I was slightly sceptical, but nine months after publishing that post I did get fibre.

The ninth post was about when my iMac Fusion Drive Failed and had to have it replaced.

The post at number eight was another post about my fibre journey, Still checking… was when the cabinet was activated, but alas wasn’t accepting orders.

The post at six was about  Dusting off the Pogo my old Polaroid Bluetooth pocket printer. Still going strong.

The post at number four was wondering Where are my Comic Life Styles? I found them.

The third most popular post was about the free wifi (or lack of) on my holiday, Haven no wifi

So the most popular post on the blog was my post about QR codes on chocolate bars,  Cadbury QR Coding and Twirling was published in 2015 and was one of many posts I published on the use of QR codes back then.

I have a 2006 Intel iMac, one of their early Intel models and the 250GB HDD is working well today as it did when I first got it. My experiences with other iMacs that I have used at work have been equally impressive. I once did though experience hard drive failure on one of my PowerBooks, but that was because I dropped it….

However when it comes to my home 27” iMacs I have been less lucky.

My original 2009 27” iMac hard drive failed and was replaced by Applecare, only to fail again a few years later. With this failure I ignored the drive and replaced it with an external drive. Eventually the whole system failed.

My new 27” iMac which I got in late 2014 came with a 3TB Fusion Drive. Fusion Drive is Apple’s name for a hybrid drive, which combines a hard disk drive with a NAND flash storage (solid-state drive of 24 GB or more) and presents it as a single Core Storage managed logical volume with the space of both drives combined.

Last month I came to my iMac I found the prohibitory symbol.

When you see a circle with a slash symbol instead of the Apple logo, it means your Mac couldn’t find a valid System Folder to start up from.

I did try reinstalling OS X by using OS X Recovery, but that failed…

Checking my backups I realised that there were some files missing from the back up disks, so using target disk mode (and another Mac) I attempted to recover the files from the failing hard drive. I managed to get some, but unfortunately I couldn’t get them all.

I was thinking of using DiskWarrior (which had helped with my previous iMac hard drive problems, however version 4 which I have is not compatible with OS Sierra. After a while though it became impossible to mount the drive using target disk mode. Disk Utility also failed to do anything except spin the beachball.

The other symptom I saw was the separation of the SSD from the Fusion Drive, this was not good news.

Taking the iMac to the Genius Bar, they were unable to enter diagnostic mode and using a network startup drive, were able to check that the iMac was working fine, and that the problem was with the Fusion Drive.

I had considered using a data recovery firm, but in the end with the majority of the data in my backups I let the Genius Bar attempt to re-build the Fusion Drive, which didn’t work, so they had to replace the drive with a new one.

The next step is to re-build the iMac from scratch, which is nice to do now and again, but is a bit if pain if you have really slow broadband. Really looking forward to getting fibre back in the next two months!

I know I have some missing data, but I think I have the important stuff. One thing I am now considering is getting some cloud based backup which has got a lot cheaper since I last checked it out.

I am slightly disappointed that the Fusion Drive failed after just over two years. For a variety of reasons I didn’t have AppleCare with this iMac, and it is something I will certainly consider for future iMac purchases.